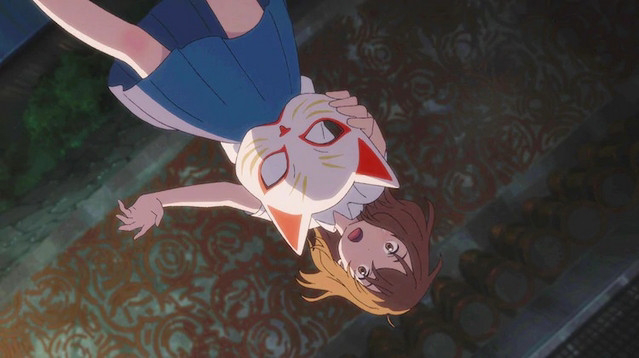 Pv Nakitai Watashi Wa Neko Wo Kaburu Reveals The Ending Song That Will Be Performed By Yorushika! This Is The Title

On Friday (12/6/2020) Twin Engine began streaming the latest PV (Promotional Video) for the anime film \ Nakitai Watashi wa Neko wo Kaburu \ or also known as \ A Whisker Away \. Uniquely, in this PV, fans began to be shown glimpses of interesting stories and new songs for the film were played which turned out to be the ending song. Fans can watch the latest PV below: As fans know in the above PV, Yorushika will bring the ending song for the anime film Nakitai Watashi wa Neko wo Kaburu with a song entitled \ Usotsuki \ (The Lying Moon). Just to explain: 1. 嘘 月 (Usotsuki). 2. 嘘 つ き (Usotsuki). Both are Usotsuki, but they have different meanings. The top number 1 is the title song Yorushika which means the Lying Moon, considering that 月 (Tsuki) in the song title means Moon (Moon). The lowest number 2: つ き (\ tsuki \) in \ usotsuki \ (嘘 つ き) is not the same as 月, even though it is pronounced the same. Apart from the song, it was previously revealed that Yorushika will be performing the theme song titled \ Hana ni Bōrei \ (A Ghost for a Flower). So so far, there are two songs that a band called Yorushika is known to perform: 1. Ending song: \ Usotsuki \ (The Lying Moon). 2. Theme Song: \ Hana ni Bōrei \ (A Ghost for a Flower). Release Date Airing of the anime film \ Nakitai Watashi wa Neko wo Kaburu \ on Netflix Watashi wa Neko wo Kaburu is scheduled to be released on Netflix worldwide on June 18, 2020. Anime Film Genre Nakitai Watashi wa Neko o Kaburu: Drama, Magic, Romance Synopsis: \ Tells about the discovery of one's identity set in Tokoname, Aichi and centered on Miyo \ Muge \ Sasaki. Miyo is a strange second year middle school student who has fallen in love with her classmate Kento Hinode. Muge was steadfastly chasing after Kento every day, but he didn't pay attention. Nevertheless, while carrying a secret he couldn't tell anyone, Muge continued to chase after Kento. Muge finds a magic mask that allows him to transform into a cat named Tarō. The magic allows Muge to get close to Kento, but in the end it can also make him unable to turn back into a human. \ \ Neko o Kaburu \ in the film's title literally means \ wearing a cat, \ but usually functions as a metaphor associated with deception or pretense .